The entrepreneurial state in China’s interior

Last week, the New York Times ran an article about how interior governments like Chongqing were wooing coastal industries by offering incentives such as lower wages, cheaper land, less strict environmental standards, and even providing moving expenses.  One of the prime targets of Chongqing’s ‘poaching’ efforts has been Guangdong province, which led the way in economic development throughout China’s reform period.  As labor and land costs rise there, along with overall prosperity and a desire for a cleaner environment, the province finds its leading position increasingly challenged by interior upstarts like Chongqing.  There are many interesting dimensions to this story.  One is simply the new geography of transportation that is changing the industrial location calculus in China.  Previously isolated, China’s interior regions like Chongqing are increasingly connected to world markets via cheap overland rail transport through Central Asia (the so-called ‘new Silk Road’).

Another interesting dimension to this story is the way it lays bare the entrepreneurialism of local government in China.  It should surprise no one that local government has become intimately entangled in economic activity in China, even as the ‘market’ has expanded.  The article quotes a Guangdong official complaining about government interference in the market:  “It’s really a problem. I think governments should not give money to companies for relocation… It violates the transparency of the market.”  Since when was the market ever transparent?  This is especially ironic coming from an official in China, but governments have been messing around with markets ever since the idea of the transparent market was invented. 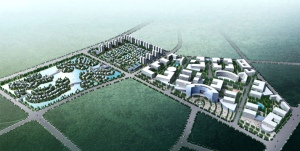 But it’s also interesting to note that Chongqing’s challenge to Guangdong can be put in the broader context of the opposing roles these two regions have come to represent in China’s reforms and economic development.  Under the now-sacked and imprisoned Bo Xilai, Chongqing came to represent a ‘strong-state’ socialist model of economic development, in which the market could help but would ultimately require the heavy-handed guidance of the state to insure equity and prosperity for all.  Chongqing was thus the ‘red’ model of reform in China, and while Bo’s fall has tarnished that image somewhat, it remains a place where the government remains a powerful force in the economy.  Guangdong, on the other hand, has presented itself much more in terms of the transparent, liberal market-oriented approach to development.  Given the large number of foreign firms operating there, and the region’s deep connections with global capitalism, such a stance is understandable.

These differences between Guangdong and Chongqing were, in 2011, symbolized by the so-called ‘Cake Debate.’  Bo Xilai had argued that his approach was to make sure the ‘cake’ of economic development was divided up equally.  In response, Guangdong Party Secretary Wang Yang argued that his more market-friendly approach was to make the cake bigger, so that everyone got more.

In some ways, that debate is still going on, as officials in Guangdong complain about government interference in industrial location decisions.

This entry was posted in Development, Environment, Globalization, Regions of China. Bookmark the permalink.